Diabetes Mellitus has been diagnosed in over 14 million individuals in the United States. There are two basic forms of diabetes. Type II diabetes or non-insulin dependent diabetes (NIDDM) is also known as adult onset diabetes. It is most typically diagnosed in adults who tend to be overweight. Type II diabetes is most typically treated with oral medications; however a significant number of these individuals do require insulin therapy. 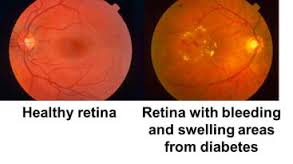 There are numerous complications that can occur in the eye secondary to diabetes, some of which are mild, insignificant, or transient and others of which are severe and vision threatening. Diabetes is the leading cause of blindness among patients under the age of 65. Eye complications of diabetes include: